From the standpoint of eternity, there is hardly any difference between a “long” and a “short” life. Therefore, it’s not whether one’s life is long or short, but how one lives that is important. It is what we accomplish, the degree to which we develop our state of life, the number of people we help become happy—that is what matters. – Daisaku Ikeda

At this intersection an amazing human being, Diana Sullivan, was taken from this world and sent into her next existence. Diana had an amazing state of life. She made many people happy and indeed that’s what matters! She will be deeply missed! 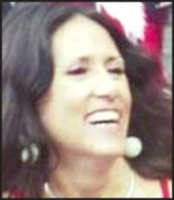 “We are deeply saddened by the death of Diana Sullivan, who was killed while biking on 3rd and King streets last Saturday. Your calls and e-mails have let us know that you are also saddened by this tragedy. We are going through a thorough evaluation of the intersection of 3rd and King, as we do for other known dangerous locations, to see what engineering and/or other solutions we will push the City to make. Since last Saturday, we have heard from many of you that the intersection of 3rd and King feels unsafe because the bikeway disappears without warning, forcing you in to fast-moving car traffic. We are bundling this information in to our review of the location and will be sharing our recommendations with you — and the City — shortly. We know that the best way for us to honor Diana’s life is to step up our efforts that much more to make San Francisco a safe and welcoming place for everyone to bike.”

A Ghost Bike for Diana

Her ghost bike is at the corner of King and 3rd Streets across from AT&T Park, where she was hit.

Someone left fresh donuts and coffee next to Diana’s ghost bike.

Many thanks to Jo Slota from Ghost Bikes San Francisco, Rafi for providing the donated cruiser from Box Dog Bikes and Alan for creating the name plaque. This is a beautiful ghost bike to memorialize Diana’s tragic death. I echo Jo’s words, “Let’s hope it draws some attention to the need for greater cyclists’ safety. I think this is a good time for each of us to reach out to the SF Board of Supervisors & the SF Bike Coalition to ask them to re-evaluate this traffic situation.”

Diana Sullivan, may you rest in peace

Cars are not king on King Street

A Letter to AT&T Park Management

SFist: Why the King Street Bike Lane Needs to Be Fixed