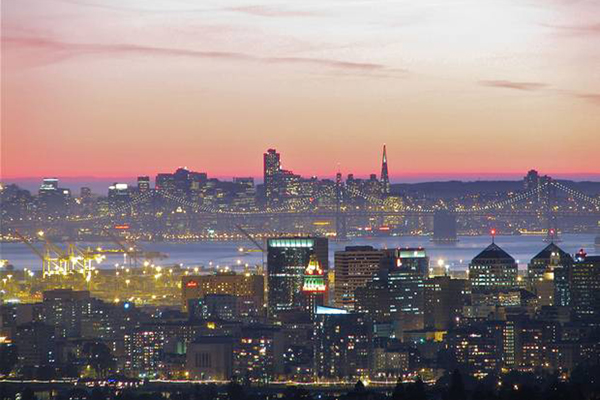 Oakland is in the foreground with San Francisco in the background. The Bay Bridge in between them links these two interesting cities, separated only by the waters of the bay. Source: The Independent

I didn’t expect my time-off from blogging to be more than a couple of weeks but it ended up being that way. I had multiple things going on, and one of them was my move across the bay from SF to Oakland. There were many reasons why we moved to Oakland, but since this is a bicycle blog, I won’t discuss it all here.

But I do want to share about my experience so far being a bicyclist in Oakland, including how I am now a full-time bike commuter and not just a weekend warrior!

From what I have observed so far, biking in Oakland is a much more relaxing experience. Although SF was wonderful to ride in, with beautiful and interesting scenery, and a very strong bike culture, it’s just not the same anymore. When you have taxis, ride-shares, freight trucks, private shuttles, and company buses becoming increasingly the norm and fighting ever more for the limited space, bicycles lose out. Until SF has real protected bike lanes throughout their entire bike network, things will only get worse. Constantly, vehicles are blocking bike lanes, speeding and cutting you off at intersections, honking at and intimidating you, and you can’t relax. It takes the fun out of riding.

So here we are in Oakland! It’s very laid-back and the streets are wide so that you don’t get squeezed by cars. Because it is not a touristy city, you don’t get the cab drivers whizzing dangerously close by you like jerks to pick up their next customer. You also don’t have as many large trucks that have huge blind spots which account for half of all bicycle collisions. There are some painted bike lanes and it is true that they are not built out to the level in SF, but it is still pretty easy to ride. I never like to share the road with drivers and you have to here a lot more, but it is easier to do so. The term “share the road” does exist here. The drivers are considerate most of the time and don’t drive nearly as fast as drivers in SF. I rarely get honked or cussed at while riding here.

One of the best things about living in Oakland is that I am now using my bike 5 days a week to get to work. My bike route includes 3 soothing miles (4.8 km) one way from my condo, and passes along Lake Merritt and stops at Jack London Square where I take the San Francisco Bay Ferry to get to South San Francisco. Then I bike another 0.5 mile (0.8 km) on the Bay Trail to get to my office.  Yes, you heard that right!  I get to ride the ferry every morning to work! Below are some photos from the ferry ride. 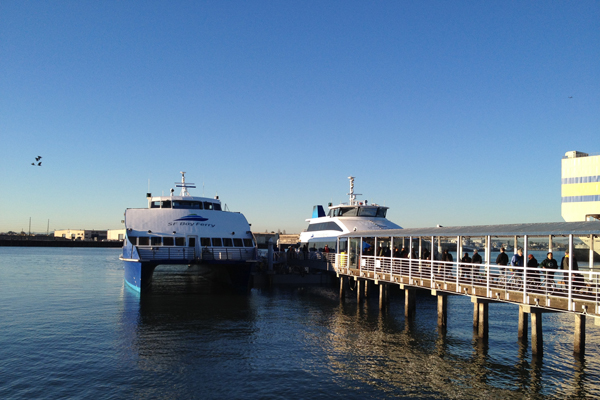 There are 3 departure times in the morning and 3 in the evening. The fares are quite expensive at $7 USD one way despite it being subsidized by bridge tolls. Bicycles are welcome though! It has bike racks in the front and rear which can park up to 34 bikes. Usually there are plenty of spaces to park. I think about a third of the passengers are bike commuters by looking at the number of bikes. You don’t need to lock your bike because it is very safe (well, there’s no where to go if one tries to steal your bike while on the water). Not locking your bike makes it hassle-free.

Two rows of bike racks in the front of the ferry.

Bike racks in the rear are usually empty.

The seats are spacious and usually are just at half capacity. There’s complimentary coffee and WiFi (with very poor reception). Drinks and snacks are served in the evening.

The ferry takes you through the Port of Oakland and across the Bay. It’s pretty cool to see these massive football-field-sized (actually, up to 3x the length) container ships from around the world bringing goods to your area. I have seen ships from London, Germany, South Africa, the Netherlands, Tokyo, and France (see image below: CSCL Le Havre).

One of many cargo ships waiting to dock at the Port of Oakland.

A popular local meme is to refer to those cranes on the left as reminiscent of the robot dinosaurs AT AT from The Empire Strikes Back.

San Francisco’s skyline as seen from the ferry.

If you ever think about using the ferry as part of your commute, I say try it out. It is not only a great trip but the water definitely will calm whatever stress you have that day.

On a side note, I may have to change my blog title since I am in Oakland now. But even though I now reside in Oakland, I will always appreciate and remember my time in San Francisco. That is where I discovered my passion for urban cycling and became inspired by the bike community there.

I look forward to sharing more with you about biking in Oakland, and the Bay Area in future posts.

Until next time, Happy Riding and Happy Holidays!