There are many bike-friendly cities in the world that are great to explore on two wheels but what if you want to safely navigate between cities? That’s where the Netherlands comes in. A country built for two-wheelers. It is a country that has terribly flat terrain, dense cities that are 20-40 km apart, and where traffic engineers/urban planners take cycling seriously as a form of transportation.

The dark green lines are not bike lanes. They are cycle tracks. They are everywhere, even from one city to another. (Note: not a complete map of the Netherlands)

What the Dutch municipalities do for its people regarding transportation is to provide equal opportunity for all modes of transportation, and that involves building an extensive network of cycle tracks not only within a city’s boundary, but extend beyond it. As a result, Dutch choose bike for shopping, commuting, transporting children, etc. 30% of all their journeys.

The country just screams bike utopia! and this is where a novice bike tourer like me would want to begin his/her bike tour. 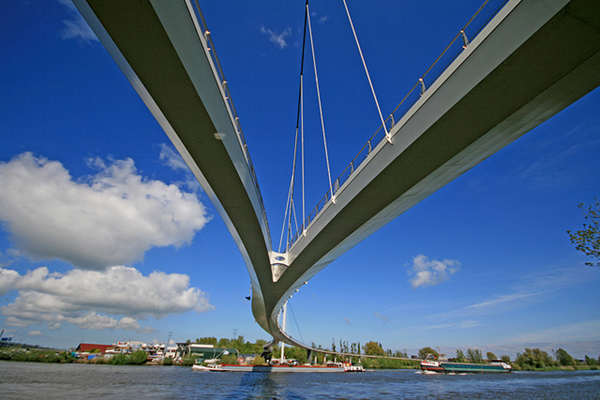 The Amsterdam Nesciobrug bicycle bridge is the longest in the Netherlands at 780 meters. It connects Amsterdam to Diemen.

Because I have never bike traveled before and will be doing it alone, I want to do it in a place that is safe. Safe meaning, I am not going to share roads with motor-heads. Safe, meaning I will always find indoor housing to rest for a night or two after a long day’s ride. Safe, meaning I will feel safe riding solo and if I get stuck due to bike malfunctions, I wouldn’t be afraid for my life.

The Second Heinenoordtunnel connects Rotterdam and Heinenoord. City to city connection for bikes.

I will be there for a month throughout the Netherlands on a 2-speed Brompton folding bike, packing light for 3-4 days worth of clothes, and will combine some transit with a folding bike to have a different dimension to bicycle traveling. Moreover, I choose this month because I want to know what’s it like to see the Netherlands during rainy season. Rain doesn’t deter them from biking and I hope it doesn’t deter me, as well.

The Hovenring Eindhoven lies at the outskirt of the city Eindhoven, built so cyclists won’t have to intermingle with drivers.

So, follow this blog for a month because this entire month will be dedicated to the Netherlands, the land of fiets!