What Options to Transport: 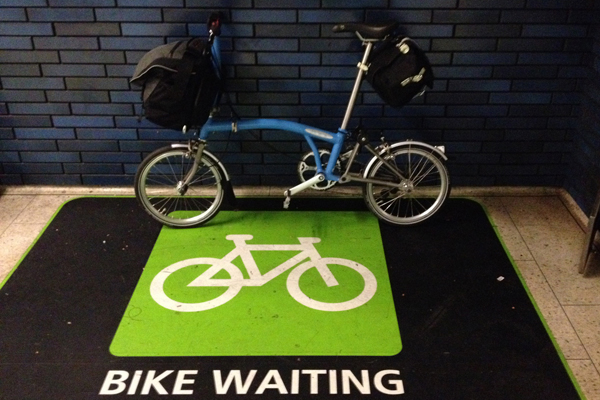 My Brompton with a Brompton C Bag and a Carradice Nelson long flap saddle bag at an Oakland BART station.

There are many options to travel on the plane with a Brompton. You can get a suitcase or a hard case that is designed for a folding bike, you can box it up at home or at the airport, you can also try gate-checking, or bring it on the plane as a carry-on. I took a combined approach. Because I wanted to be able to ride to and from the airports and not having to rely on taxis or transits, I decided to get a portable transport bag and checked in my Brompton. Moreover, I already have enough stress as it is from flying, I didn’t want the extra stress from dealing with TSA and gate-checking staffs. 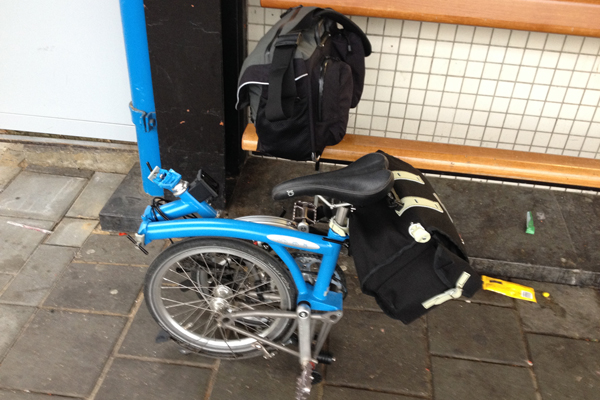 The Nelson long-flap saddlebag and the Brompton C bag were enough for a month’s bike trip.

From SFO to Schiphol Airport:

I took my Brompton along with a Brompton C Bag and a Carradice Nelson saddlebag to the BART station and arrived at SFO. The C Bag was big enough to fill 3-4 days worth of clothes and a laptop, while the saddlebag is filled with electronics, bike repair kits, and a transport bag. I have the Nelson saddlebag hooked up to a quick release clamp for easy on/off the saddle. Traveling during the rainy and cold season for a month requires some extra gears and because I wanted to blog while I was there, extra electronics were needed as well. These extra things made both bags very heavy and bulky, and a real hassle to bring my Brompton as a carry-on. 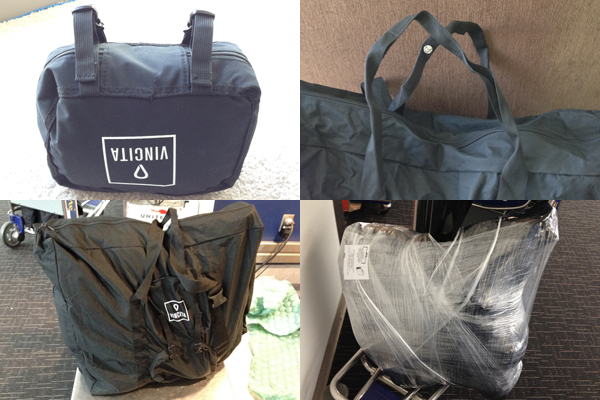 This transport bag by Vincinta served my purposes very well. When it’s folded, it’s small in size and can be mounted on the handlebar, bike frame or on a saddle with loops. When it’s opened, there’s enough room to shove in clothes or what have you to protect your Brompton.

When I arrived at SFO, I whipped out the transport bag and put my Brompton in at one of few shrink-wrapping stations. I didn’t remove anything from the bike and just tightened the hinge clamps. Then I stuffed my 3 separate plastic bags of clothes, two on both sides and one on top of the Brompton, all to protect the frame. And had the clerk shrink-wrapped it to keep everything in place. I asked the clerk whether he has a fragile sticker and he didn’t. The cost of shrink-wrapping was around $10-20. You can also have it bubble-wrapped too before putting it in the transport bag but that would cost extra. 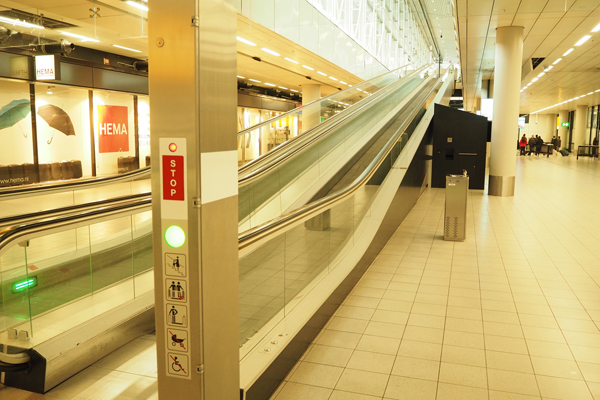 Is this ideal for rolling your bike up the stairs or what? There is no sign saying bikes are banned.

After arriving in Schiphol Airport in Amsterdam, I unwrapped near the baggage claim where there is a nearby desk for assistance. I asked for a scissor and started cutting the shrink-wrappings away. And my bike came out in one piece!

As I walked around the airport, I scanned for anything that would serve people on bikes well. I saw this escalator that could be possibly for people with bikes. The ramp escalator can be activated to move in either direction. The incline is not as steep as a regular escalator and no steps which make it perfect to roll your bike up and down the ramp. Ingenious! I want to call this a “bike escalator” because this type of escalator is used in a few bike garages else where in the Netherlands. 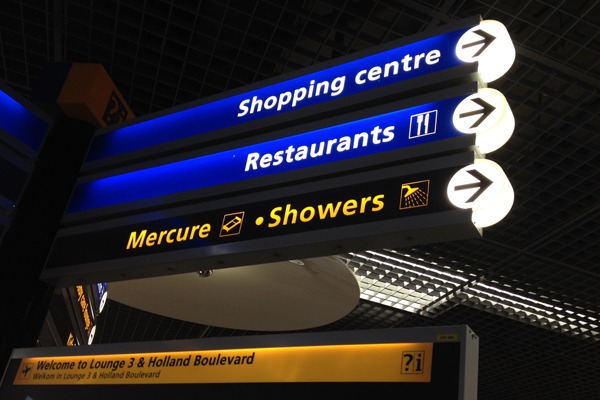 What about showers when you arrive at the airport sweaty from riding your bike?

If you ever come riding to the airport sweating, there are showers that you can use. I don’t know how much it cost, but I am sure your flight mates would appreciate you not smelling.  Moreover, in the basement floor of the airport, there are medium and large sized lockers that you can store your Brompton. The medium sized locker costs 7 euros/24 hrs which can fit your folded Brompton easily. The large sized costs about 9 euros/24 hrs. Either locker can be used up a maximum of 7 days which then your baggage will be stored in the baggage depot nearby at the same rate. The baggage depot carries boxes for bikes but they are for regular sized bikes. You can just cut it up to turn it into a smaller box. 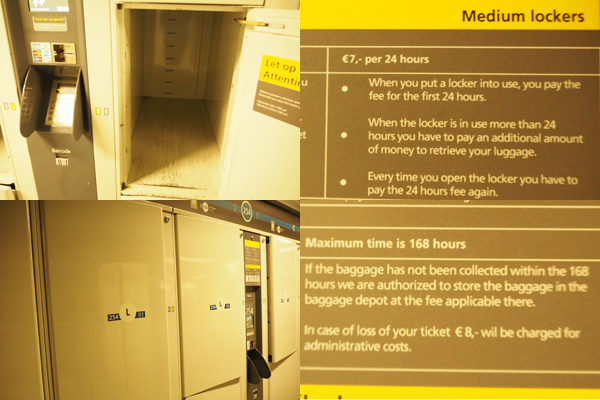 Medium and large sized lockers, along with boxes for bikes can be found in the basement floor at Schiphol Airport.

Taking my Brompton on Transits:

When I arrived in Amsterdam I was too tired to ride to Leiden which was my original intention. So instead, I rode the NS Intercity train which is conveniently connected to the airport below ground level. You can buy fares at a counter or at a machine. If you bring on a full sized bike, you will be charged 7-8 euros extra on a trip. A few times I brought my bike unfolded onto trains without any question asked. However, I folded partially when there are people around. A nice thing about Brompton is that you don’t have to remove any bag when folded partially. 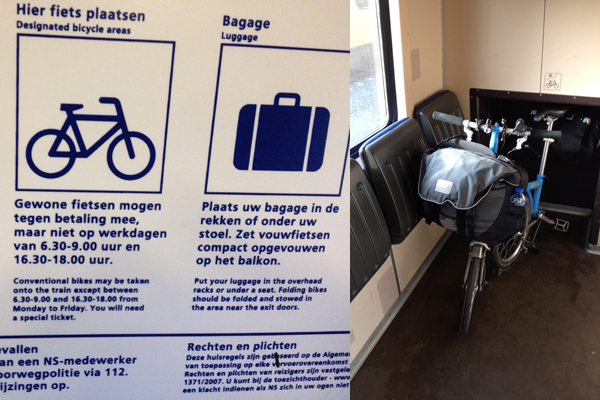 Conventional bikes need special tickets and are not allowed during rush hours from 6:30 – 9:00am and 4:30 – 6:00pm. Folding bikes is mentioned as a luggage if folded away. Space for bikes on trains are limited.

The NS trains go through every cities and stop conveniently in the heart of city centers. Huge bike parking garages are right there when you exit the stations. These are secured parking with staffs and bike repair booths. And there are charging stations for e-bikes! There are large sized lockers at these stations too that have enough space to store your Brompton or heavy baggage overnight (around 6 euros) or longer at an increasing sliding rate. I can say that very few passengers take their bikes on trains and which by design, space for bikes on train is limited, barely fitting a couple of bikes per bike-dedicated car. 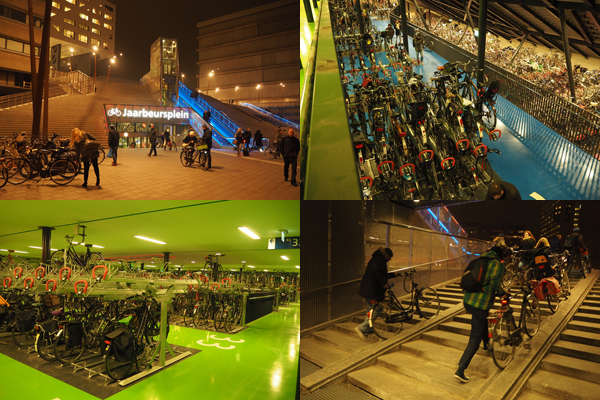 This is a state of the art parking facility in Utrecht that accomodates 4500 bikes. The first 24 hrs is free, after that, daily rate is 1.25 euros for bikes and 2.50 euros for cargo bikes. They also have bike rentals and bike repairs.

The Netherlands are known for their water ways but not everywhere are served by bridges. To help with crossings, water buses are strategically located. Some are free but many charge a fee of around 2 – 3 euros. No worries if you don’t know how to use the ticket machine. Just pay the staff when you are on the water bus. These water buses are nice and comfortable, and they have bike racks for both small and regular sized bikes, which are located in the front of the ferry. 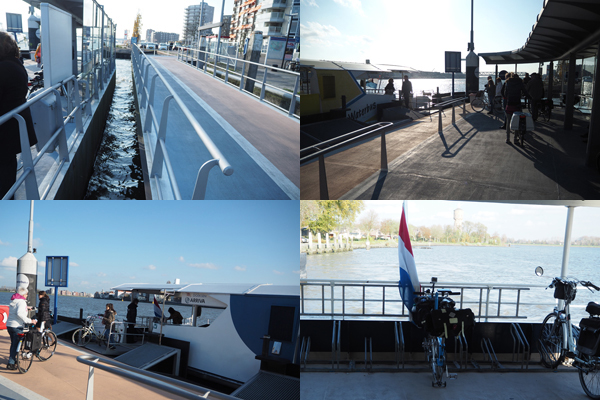 Water-bus station at Dordrecht. A bike rack that fits at least a 16″ inch wheeled-bike.

During the November in the Netherlands, I was fortunate to have only a few days rained on me while riding. I rode to 13 some cities via some small villages and took transit to 4 cities. On bike, I did about 300 miles and it was pure satisfaction! Where there’s pavement, the bike path is smooth. Where there’s no pavement, it only happens in rare occasions. I got a chance to ask Mark at BicycleDutch, when was the last time he got a flat tire on his bike. He said about 20 years ago! Yep, if I had known that, I would have lightened my bag by leaving some bike parts at home.

The cycle tracks are constantly flanked by both sides of tall autumn trees and green pastures. More often than not, water ditches line between bike paths and the cows and horses grazing. In these water ditches, I saw swans, ducks, and geese. I saw a lot of ponies and I was wondering if ponies are one of Dutch favorite pets. And I still wonder. There were instances where I rode for at least 10 miles without sharing any road space with cars. Sometimes, I find my bike chain noise was the most annoying noise on the cycle track. Sometimes, I passed several groups of kids on bikes riding home from school far away from my destinations.

Getting to Schiphol Airport by bike from Amsterdam is as easy as riding anywhere in the Netherlands. Most of the way was consisted of cycle tracks and some through shared side roads with cars. As usual, I relied on Google Maps on my I-Phone which was accurate 95% of the time. The other 5% I relied on street signs on cycle paths which are color red coded, different than the blue signs for cars. 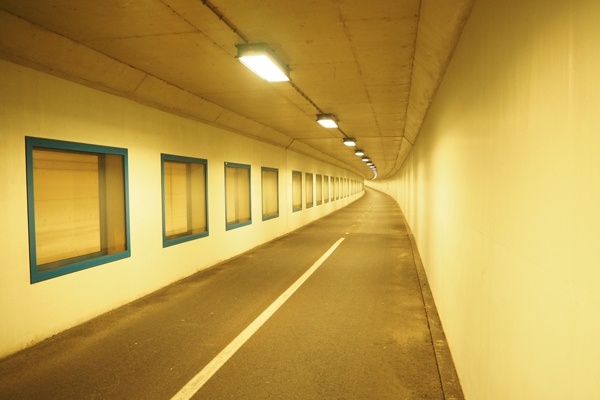 Cycle track crossing under the airport

Again, I didn’t bother with bringing my bike on the plane or gate-checking it. I went the safe route by wrapping the bike with clothes. The packaging booth doesn’t shrink wrap or carry bubble wraps because of security restrictions, so I had to buy a strap from them to keep my clothes attached to the bike. That’s something to think about when you are flying out of Amsterdam. I do recommend two straps for more secured packing. The plastic wrapping costs about 10 euros. The good thing is that they have “fragile” labels if you ask. 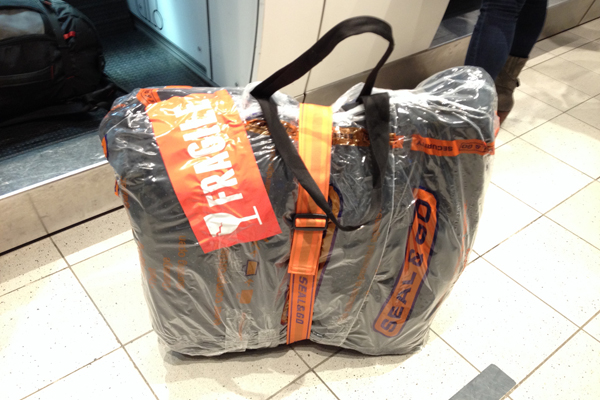 Ask for a “fragile” label if you decide to check in your bike.

I would do this again with my Brompton. It complements bike touring the Netherlands very well. Because it’s flat and easy to ride around, I didn’t have any difficulty with 16 inch tires and 2 speeds. Some hotels have very small and some even don’t have elevators with steep narrow stairs, but I didn’t have trouble managing it. Flashing bike lights are illegal, so bring spare lights, extra batteries, chargers, etc. Bring music too! The only complaint I have about the trip was that my baggages were too heavy to go any faster and longer.

The Netherlands is a beautiful place for cycling. Wherever you are, a bike path is footsteps away. The air is always fresh and pleasant, and you are away from car exhaust fumes. The built environment, whether the manicured trees or the row of brick houses, is intimate and human-scaled. It’s really safe, as expected. Drivers are considerate and mindful because they are also cyclists. I didn’t bring my helmet and rode everywhere without one. From the first day to the last day of my trip, I was just as amazed and awestruck. The cycle bridges are true wonders, the cycle tracks are long-lasting, and the number of people riding are like music to my ears. 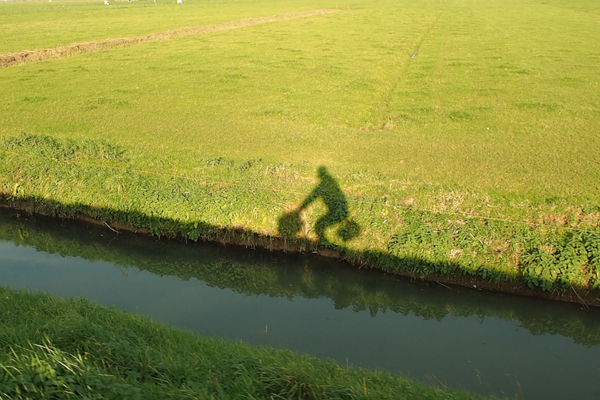 Me and my Brompton in Bike Utopia…I will visit, again.