Emeryville, a small neighboring city west of Oakland is pretty interesting. It has a population density similar to Oakland at 2000/sq. km. Emeryville is not completely a suburb and yet, it’s not an urban city either. It is full of companies like Pixar, Bayer, Novartis, Jamba Juice and Clif Bar. It doesn’t have light rail transit but it has a station for Amtrak. Moreover, there is a free shuttle service, Emery Go-Round, that takes you almost every where in the city and runs on weekends. But then again, it’s very car-centric with big box retailers like IKEA, Home Depot, and Target.

What is so interesting about this city are the residential streets. A majority of side streets are marked with Bike Blvd symbols and width of the streets are comparably narrow. When you ride your bike on major arterials it is pretty scary despite having bike lanes. Traffic lights on major streets take forever to turn green and bike lanes are narrow and next to multiple vehicle lanes. But it’s completely a different pace and feeling when biking on the residential streets.

A children’s park on 61st and Doyle St.

As a matter of fact, it’s quite family-oriented. There is a children’s park, a community garden and a recreational park. Many homes are detached but have small footprints, while most newly built homes are in apartment or condo-style. One progressive neighborhood I want to bring up is on Doyle St. It sort of reminds me a little of the Netherlands. This neighborhood has an off-street bike path that starts on Doyle St. and Ocean Ave. and ends on Murray St. in Berkeley. I thought it’s pretty cool to have something like that outside your home. I find it suitable for children to ride for fun but it’s not sufficient for active transportation for adults. Because it’s a shared path with pedestrians, it needs to be wider.

Shared path between pedestrians and cyclists. Too narrow to be suitable for active transportation.

Another pitfall about the off-street bike path is that when it is interrupted by a street, there is no speed bump to slow down drivers. Instead, shark teeth signs and street signs are there to alert drivers to yield. However, I find this in-effective as I already saw some drivers passing through it without slowing down.

When the off-street bike path is interrupted by streets, shark teeth signs are marked for drivers to yield.

In the other parts of the city where large businesses are located, middle dividers or small neon signage are placed in the middle of road at crosswalks to calm traffic. 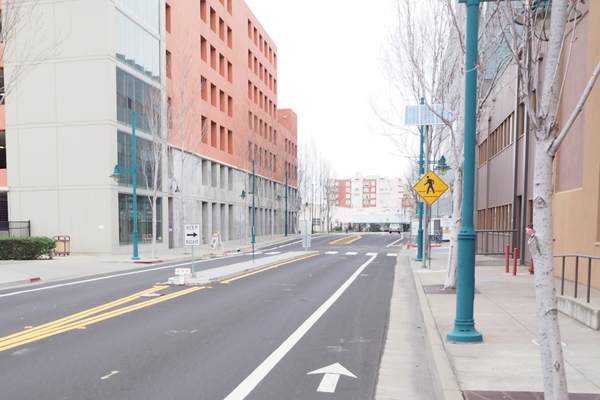 A middle island to calm traffic on Horton St. where major companies are located.

Driveway that is also a bikeway. A smart use of public space. 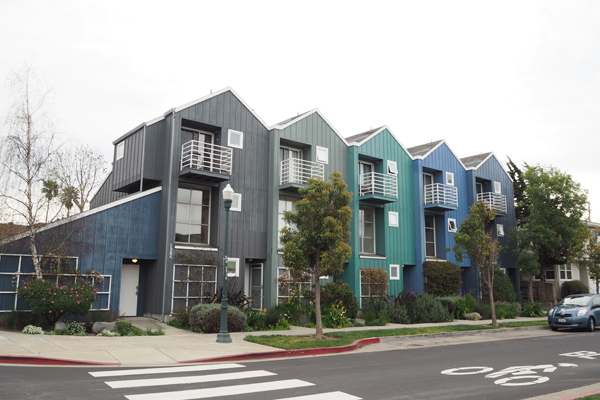 Reminds me of the red brick row homes in the Netherlands.

It is always nice to see children on bikes even if they are not biking.

As a bonus for its residents in Emeryville, they can enjoy its proximity to the Bay Bridge. I see many cyclists going through Emeryville to a bike trail that takes them to the end of Bay Bridge’s eastern span. Pretty cool to have this in your backyard.

I am surprised of how bike-friendly this city is. It is a land of big box retailers with big office parks and they still can pull it off with bike-friendly infrastructure. Kudos to its urban planners. I hope you continue making your city a better place to bike!