Do you ever wonder why all of a sudden a bike lane ends for any practical purpose? It’s most likely because space for cars is more important than your safety on the road. As long as there are enough space for both cars and bikes, then you will have a bike lane. Where that’s not possible, bike lane will most likely convert into a bike sharrow or disappear altogether. And street parking is usually the culprit.

The watered-down Polk Street plan in San Francisco is a prime example between car parking vs bike safety. On Polk St., merchants or shop owners believe that their customers need street parking to frequent their shops. Surveys have shown that 85% of the people patronize their business come either by foot, bikes or buses. It is more than likely they are fighting the spaces for their own cars.

In any case, what about when shops are not present, is parking spaces still required? Nonetheless, I have found a few examples showing car parking is still given priority over bike safety when riding around the beautiful Lake Merritt in Oakland. 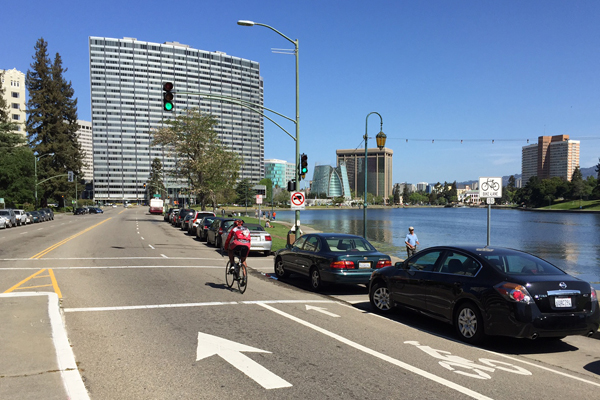 On that section of Lakeside Dr., not one shop is present. You can hardly see the “bike lane end” sign to the right behind the parked car. This is a long stretch that doesn’t have either a bike sharrow or bike lane.

The photo above shows a typical dysfunctional bike lane. Bike lane ends because car parking takes precedence over bike safety. Obviously, there is not one shop there. So, why is car parking necessary? Don’t people come to the park to stroll, jog or picnic? Any urban park like this should be promoting active transportation but not at this park. Not to mention, car parking ruins the curb appeal of this beautiful lake and endangers pedestrians when they cross the streets.

And why is the “Bike Lane Ends” sign posted right where the bike lane ends. What do you want bicyclists to do when they see a sign like that? Go ride on the sidewalk? Pull over and walk our bikes? Also, the sign is not visible when it’s posted far away and behind a parked car? At the very least, urban planners should be placing those stupid bike sharrows beyond this point.

Next, I want to show you (traffic planners) why a bike lane should be continuous. Below is a series of photos showing a cyclist is being endangered where a bike lane ends at Lakeshore Ave. and MacArthur Blvd. You could see that the cyclist was swerving away and resume it’s position afterward. This is a problem every rider faces when a bike lane ends. This sure as hell is going to scare everybody who is on the fence of riding with the current bike infrastructure or there lack of. The reason for this is because up ahead there’s space allocated to a handful of parking spaces (photo 5 of the series). This section is adjacent to the 580 MacArthur freeway and bike lanes should be continuous to provide that safety to cyclists.

2. Cyclist has to swerve to let the bus go. A dangerous moment every time.

3. Cyclist has to completely pulled over to let the bus go.

4. Cyclist now has to resume its position in the middle of the road.

5. Car parking on Lakeshore Ave. and MacArthur Blvd. Do we need to sacrifice street safety for 7 parking spaces?

I used to live in Grand Lake neighborhood and the scariest part of my commute is riding on this stretch. When I found out from Bike East Bay Coalition that they will installing bike lanes, I was excited to go check it out. Now they do have a bike lane but not yet painted (see dashed and light markings in photo), and new bike sharrows as seen in the photo below. So yet again, the same old theme still applies. A brand new bike lane that is half-assed because of car parking. This is especially bad, because it disappears at mid-block. A no-no protocol in any street planning manual. 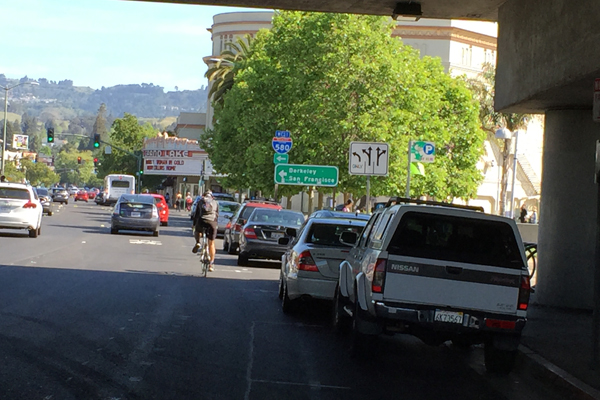 This area is on Grand Ave. heading north into Grand Lake neighborhood. Notice a new bike lane will be installed soon but disappears again for car parking. This is especially bad because it ends mid-block.

Shops are nowhere in the vicinity. Just car parking for the park for 8 freaking vehicles over the safety of cyclists? Yes, there is a farmer’s market every Saturday but there’s also plenty of parking nearby, a parking lot under the freeway (not shown). Drivers can argue that a Grand Lake movie theater is nearby, however, there’s also another parking lot around there.

I don’t see any shop around. The Grand Lake Theater up ahead has a parking lot nearby, so no need for these extra spaces for 8 cars.

So, it boggles my mind to think that even when shop keepers are nowhere to be seen to fight for parking spaces for their presumed customers’ base, then why do we still having this ridiculous traffic configuration? What’s crazy is that a park is for people to enjoy tranquility and recreational amenities that a park provides, why is bike infrastructure so incomplete? Lake Merritt is a perfect place to bike. It’s only 5.5 km (3.5 miles) in circumference, perfect distance for a nice ride. Moreover, you would think that any new bike lane installments, urban planners would know how to best implement them. But, of course bike safety is never in their mind to begin with, or are they just that incompetent?