My first Midnight Mystery Ride (MMR) was about two years ago and it was probably the most amazing group ride I have ever done. It was SF-esque- mysterious, intimate, and awe-inspiring. I was very lucky to experience it on the night that it was hosted by Mission Bicycle Company (they organize the best ones). MMR is held on the 3rd Saturday of every month at midnight with very little information. The only information you will get are the organizer’s name (that could be anyone) and the location of the meetup on that day. I think this concept is what keeps MMR special and underground. The three times that I have been to MMR, I was taken to places that were off the beaten path and even those that a native would never experience.

I have a friend, Dante, who just got bitten by the bicycle bug and I wanted to show him what the cycling community is like at midnight. Also, I haven’t been to one for quite awhile, so it was a good time for both of us to check it out. We met at Truck and Bar Kitchen on 1900 Folsom St. in the Mission minutes before the clock struck midnight. Complete strangers were introducing themselves to us when we arrived. It was welcoming since I haven’t been to one for almost a year.

In the photo below is the leader, Gary (left) for that night. He planned for a leisurely ride, and that was pretty much a chill ride for conversational cycling.

We headed NW on Folsom St. and stopped at the corner of Folsom and 2nd St. for our first social gathering.

After 20-30 minutes at our first stop, we started heading toward the Embarcadero on Folsom St.

When we arrived at the Embarcadero, it was barricaded off for the 36th SF Marathon taking place the next morning, but the security patrol was nice enough to open it up to let us through. The cool thing was that there was not a single car on that street!

The second stop was a beautiful view of the Bay Lights on the Bay Bridge. We met a couple from Sacramento who visit SF on a monthly basis but haven’t seen the Bay Lights. That was pretty special to them.

The final stop was on the Ferry Building pier behind a night club I think. It was pitch black so I couldn’t get any good photos. We did get free music coming out of the night club, but it was pretty bad. =)

There were about 24 people on bikes, all very nice and friendly. It was easy to strike up a conversation with complete strangers and because we all have this underlining understanding and interest in this Midnight Mystery journey, it makes it a whole lot more intimate.

This intimate night was how I remember San Francisco three years ago when Nellie and I first moved here. A peaceful and beautiful night wherever you ride. Personally, I think it’s almost sad in order to feel that again, I have to ride in the middle of the night to get this wonderful experience.

Watch our video of that night:

The second Sunday Streets of the year was held recently on April 14th in the Mission District. Compared to the first Sunday Streets held on the Embarcadero, the event space was more compact- only about 2 miles (3.2 km) of car-free open streets but the event was crowded with people and various activities. Although it can be a little harder to ride your bike the whole way through due to the crowds, the Sunday Streets that are held in the Mission District are arguably the most popular and culturally interesting ones. Indeed, there were plenty of interesting things to see and it was an amazing day full of energy and fun!

If you missed the event, don’t worry we have lots of photos for you!

Trainer and his circus monkey for LGBT youths.

One of the great things that Sunday Streets provides is the opportunity for ordinary people to promote their small business, get publicity for their rock band or just sell their crafts. In this case, this gal Beck is having a yard sale.

Beck’s Rummage Sale! That Peugeot mixte will be gone by day’s end.

Poems are a rare thing these days, and even rarer is his typewriter. 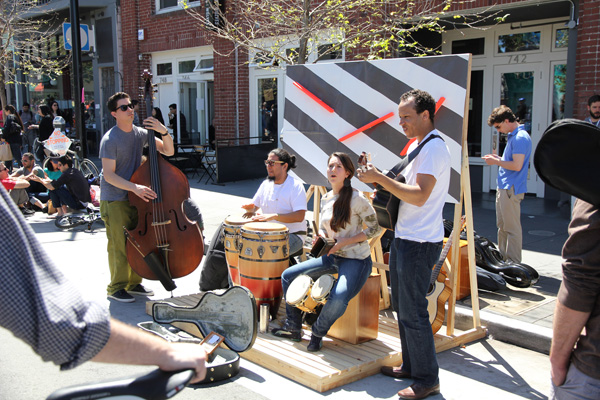 A Latin band performing without any amplifier. It’s nice! 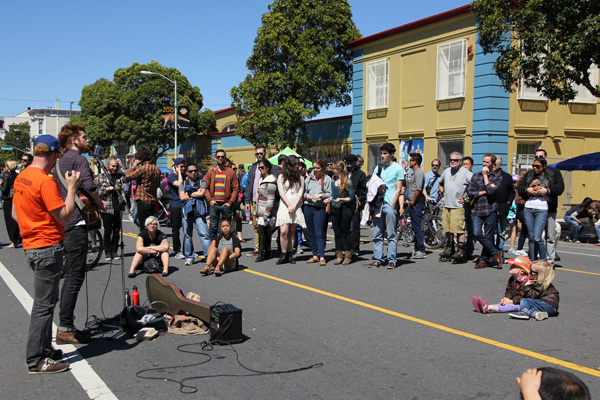 Those two children are already fans of his music.

I had to take this photo – contrast in ambience.

Child in the middle is dozing off while her face is getting face-painted. How cute!

I have never seen so many people hula hooping! 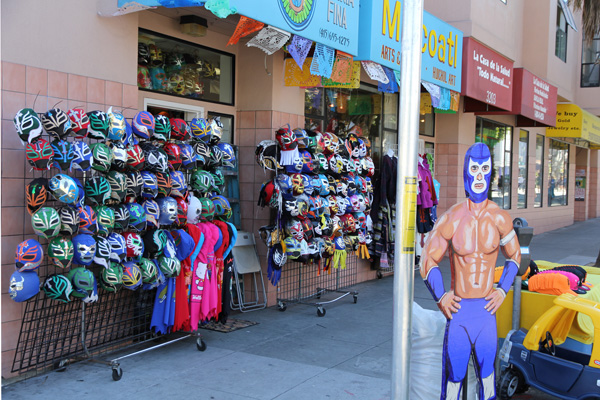 And I can’t end without showing any coverage on all things biking.

Mission Bicycle Build It – he’s showing to the audience how to build a bike.

Penny Farthing – all steel and no rubber.

If you want to experience Sunday Streets in the Mission District, the next one held there will be on July 28. Mark your calendar!

It’s been said that San Francisco doesn’t do fashion well. In fact, former San Franciscan and famed author Danielle Steel famously said about style in San Francisco, “There’s no style, nobody dresses up—you can’t be chic there. It’s all shorts and hiking books and Tevas—it’s as if everyone is dressed to go on a camping trip…”  With all that stunning natural scenery around us, I guess it makes sense we’d have lots of outdoor gear. Being here, it is so tempting to want to throw on the kind of looks shown below which we are affectionately calling ‘Camping Chic’.

I see a cool beige fedora with aviator sunglasses.

I see a black hat and fat red tires. Check out his reversed bicycle stem.

I don’t know, but his handlebar grips, red brake cables, wheels and bell are as cool as his hat.

Have a nice week bicycling!

We were on Valencia St. the other day and noticed a few skateboarders and families riding their bikes on the bike lanes. It is more common to see them in this neighborhood than in other parts of the city.

Also, there is a BART public transit station in the area and that enhances bicycle commuting because people can use their bikes to get to the station, bring them onto the trains, and use them when they get off to go the last mile to their final destinations.

Because of this, 15-20% of all trips are made by bicycle in this neighborhood, making it the most bike-friendly in the city (see photos below). Citywide, it is 3.5%.

But much more needs to be improved to get more people to ride. Besides calming streets, a protected and continuous network of cycle tracks needs to be implemented rather than keeping with the wimpy striped lanes and confusing bike sharrows. By having high quality, protected bike ways, the city will better be able to encourage all age groups to ride. 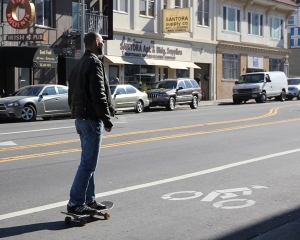 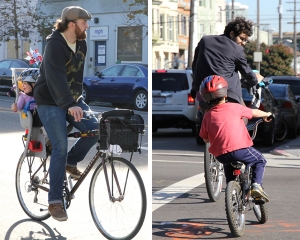 Here is a wonderful blog article written by Bicycle Dutch of how the excellent bicycle infrastructure in the Netherlands can benefit all people, including the disabled and elderly.

The ADA (Americans with Disability Act) is one group that is not keen on bike improvements in our city. Their constant argument against cycle paths is the elimination of parking spaces because they think riding in a car is the only good way they can get around. I am certain that if they watch the video below, they would change their tune.

A big concern of the disabled and elderly is that they need to rely on others to take care of them and can at times feel a loss of dignity from this. So if an elderly or handicapped person can at least have the flexibility of going out without having to depend on someone to drive him/her to places, they would feel less disabled and more free and independent.

Also, if the very elderly do still drive themselves around, they could be endangering other road users due to their lack of quick reflexes, alertness, and fast reaction time. This is especially the case in a dense and busy city like SF.

The video below is taken from Bicycle Dutch and is a great illustration of how cycling infrastructure in the Netherlands benefits everyone.

Louis J. Helle, an international scholar, once said, “Bicycling is the nearest approximation I know to the flight of birds.” During last year’s London Olympics ceremony opening, there was a skit performed with dove bikes that was inspired by this quote.

The visionary founder of Apple, Steve Jobs, once compared the efficiency of locomotion between a man riding a bicycle and the flight of a condor. He determined that, “[sic] a man on a bicycle, a human on a bicycle, blew the condor away, completely off the top of the charts.”

So the idea that riding a bike is like flying like a bird must have truth to it.

Going downhill on many of San Francisco’s hills, I often wonder if this how it feels to fly like a bird. Is it the feeling of freedom, the ease of movement, the wind in your face, the speed, the glide…etc. that gives you this sensation?

The photos below capture some of that feeling. So carefree…

San Francisco has been called “Paris of the West” due to its romantic scenery, Beaux-Arts architecture (e.g. City Hall and the War Memorial Opera House), food and wine culture, live and let live mentality, and concentration of French expats. So it makes sense that Paris is a sister city of San Francisco… but what about its Dutch influence?

It is not as prevalent as the French influence but you do see some Dutch influence if you look for it. SF has two huge Dutch windmills which were once functional in Golden Park. The city’s favorite color is orange (Go SF Giants!) and it is also a color associated with the Netherlands as well (it is the color of the Dutch royal family and sports fans don orange at events). We have the most medical marijuana dispensaries per square mile while Amsterdam is dotted with its world-famous marijuana coffee shops. Amsterdam is well-known for their Red Light District and SF is home to pornography and the once bustling Barbary Coast. San Franciscans and the Dutch love their electronic dance music and we love riding our bikes as much as the Dutch! That said, we are heading to Amsterdam this spring and hope to report on more similarities in a future post.

Dutch bikes are so versatile that you can bring pots of plants home.

In the Netherlands, the majority of men ride step-through bikes.

San Franciscans and the Dutch both like the color black as well as orange.

The photos above were all taken in San Francisco. Do you think they look Dutch?