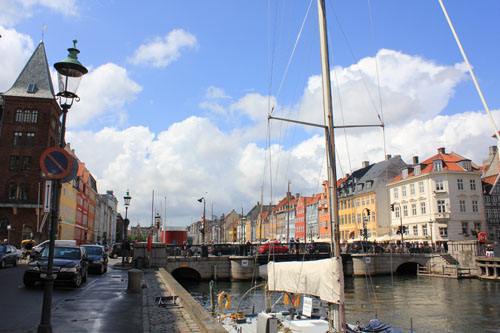 I’ve heard that the Danish bicycle…

For those of you who enjoy people watching, you know firsthand that when you visit a new place you can expect the people there to look quite different. It doesn’t matter if the new city is across the ocean or just 400 miles south (ahem, Los Angeles), or even in another neighborhood (the Mission District vs. the Marina District). It isn’t just a racial thing, but also the way they dress, what they are generally doing as they pass, how they carry themselves and speak, and the facial expressions they wear that can be quite different. Even the smell can be distinctive (I’m thinking of Paris). Interestingly, despite the global market and the same bike brands being sold virtually everywhere, there also exists such a thing as bicycles of a certain place having a certain aesthetic.

For those of you who have not yet visited Copenhagen, the capital city of Denmark and one of the two most bicycle friendly cities in the world, I’d like to ask you what you think the bicycles there would be like. I’ll tell you what I thought before I went back in the spring of 2011. I thought there would be, “Good looking and stylish people zipping around on equally good looking and stylish bikes.” Was I right?

Well, I was right about the good looking people part. As for the bikes, I was partially right. From what I observed, the bicycles of Copenhagen fall into four general categories (actually five if you count the bike share bicycles).

The first category does indeed include all their good looking bikes. Wow, there were beautiful bicycles there that I had never seen in my life that reflect the artistic expertise and eloquence of Danish designers. I’m thinking of the Avenue Cykler.  I never knew such a bike could exist until I saw them in Copenhagen. They are not that common there but you do see them occasionally, and every time you do you have to stop and look and admire. That kind of bike would not last in San Francisco because if it doesn’t get stolen while locked somewhere, even with three U-locks, you will get held up at gun point while riding on it. It attracts way too much attention and is too noticeably expensive (and they are indeed expensive). It would be like bringing a unicorn into Satan’s lair- the horn is going to get cut off.

A good looking bicycle in a spectacular gold color. The designer/maker, Avenue Cykler, is not surprisingly a Danish company. The Danish are internationally known for their high design in everything from furniture to architecture.

Another beautiful and unique frame from Viva Duro.

But, on the other hand, Copenhagen has some pretty broke down bikes too. They have bikes that are the equivalent of homeless people in SF. Derelict, rusted, dirty, hanging out on corners, and just hanging on. I have never seen so many rusted bikes in my life. Copenhagen is a clean and well-maintained city, for sure, so those bikes must be the most hopeless looking things in their town.  But I think people actually still use them anyway. I actually respect that they don’t feel a need to throw out the old and will try to use the bike until the day it collapses beneath them. Then there are ones which have tried to live a new life and are spray painted a single color from one end to the other, wheels and all. They actually come out having some artistic aesthetic when they do that.

Aww, you poor thing. You’ve spent too many nights out in the cold and snow. 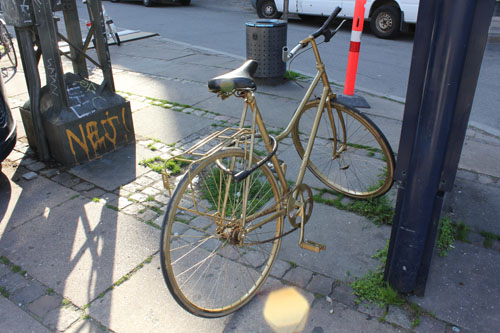 “I’m a lady dammit, and you’d better treat me like one.”

The third category of bikes are the most common. They include your typical city bikes with step through frames. They have a basket in the front and fenders. They don’t stand out very much and are usually red or black in color. They are practical and easy for every day use and I suspect they were imported from the Dutch. 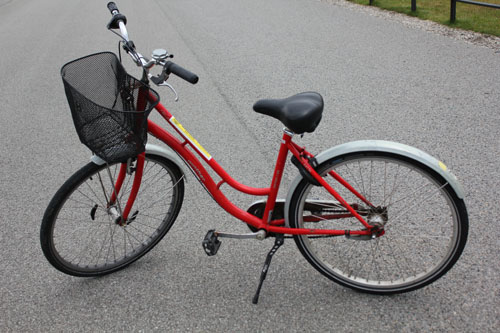 No, but this one has a cartoon painted on the back.

Another group of bikes you will observe in Copenhagen are the cargo bikes. I actually loved seeing those and they make for the cutest Kodak moments because they will often have an adorable Danish child sitting inside while mommy or daddy pedals them around. The children are usually alert and like to look around at the scenery, pointing at things and making commentary. Sometimes there is also a cute family dog riding inside with the tot like a pair of best friends. Just too cute. I don’t think grown ups outgrow riding in those cargo bikes from time to time because I witnessed a mobile bridal shower celebration taking place using one. The bride-to-be was riding in a cargo bike box with a bridal veil on her head while her friend, probably her bestie, pedaled her up and down the streets of Copenhagen. Her entourage of friends were riding on their own bikes beside them ringing their bells and cheering and people were cheering them on as they passed. 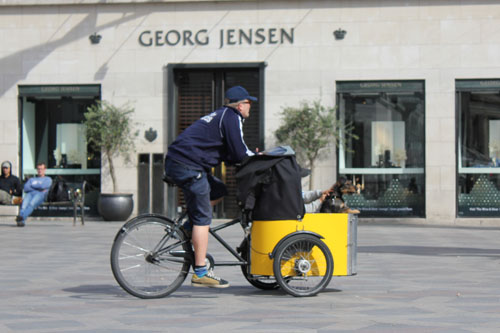 Finally, bike shares make up the last category and they are actually pretty awful in my opinion. It is hard to get one, they are in such short supply and if you leave yours on the side and look away for a minute, it will be gone. It seems the social agreement there is that you can just grab one when you see it no matter who might be claiming it. They are also huge. Danes are tall and so if you are a petite person like me, forget about trying to mount one. They are heavy like a mother******. I use that word because riding their bike shares will probably make you utter those curses. They are sometimes broke down too and start to resemble those hopeless rusted bikes, as you will see in the photos below.

Dear Copenhagen bike share bicycle, I don’t think we get along so I’m leaving you.

I think this is a bike share. Either way, it has issues. (To be fair, I actually saw this one in Malmo, Sweden across the bridge.)

So here is the run down on bikes in Copenhagen: Lots of typical city bikes and broke down bikes, occasional nice bikes better than you’d see anywhere in SF, a decent number of cargo bikes, and some clunky bike shares. I want to emphasize that most bikes there are ordinary or broke down but when you do see a nice bike, it is really, really high-end and well designed.

SF on the other hand, doesn’t currently have extreme high-design bikes like the Avenue Cykler. The closest are PUBLIC bikes and some others, but while they are nice, they are still not at that level. There will be a highly-designed Faraday electric bike coming out soon, which was designed by IDEO, but until then I have yet to see anything on the level of those in Copenhagen.

What I do see in SF along with PUBLIC bikes, are lots of colorful fixies, lots of mountain or hybrid bikes, lots of road bikes with spandex riders, some touring bikes with panniers, and a few city bikes. Interestingly, we don’t have many or any broke down bikes. And we certainly, at this point in time, don’t have any bike shares. We do have those Blazing Saddles rental bikes though and pedicabs if you include them. I do see an occasional cargo bike but I would like to see more of them. At events, I sometimes see man-tricycles which is my name for those three-wheeler adult bikes that usually have bumping hip-hop speakers on the back. I also see unicycles with riders who are very good at balancing on them and can even ride them up and down hills. I see tall bikes and I see Rock the Bike bikes. I see bikes that were made for Burning Man and shaped like a dragon or covered in colorful faux fur.

You know, SF bikes are pretty cool too in their own way. I like bikes in both Copenhagen and SF. It’s like that Jay-Z song that goes, “I love girls, girls, girls, all over the world…” except you replace “girls” with “bikes”.