When I am riding on Dutch cycle tracks, I feel wonderful and at the same time a superior sense of dignity you don’t get riding anywhere else. As I mentioned in previous posts (1,2) on “Dutch cycle tracks to die for…”, the paved bike paths are continuous, wide, smooth and “beautifully landscaped”. The “beautifully landscaped” theme is also extended to bridges built for cyclists as well.

The Netherlands probably has the most bridges in the world because of their numerous canals and ditches. And obviously, bridges built specifically for bicycles are a common sight. These bridges are boldly designed and constructed to show appreciation to people biking- at least I’d like to think so. Almost every cycle bridge that was built in the current era that I biked upon is an art piece. When you cycle on some of these bridges, you feel as though you are in a time capsule, while others you feel like you are flying in space. And some are built so that you can enjoy  the views of the city. The bridges are built with a slight incline that any unfit person can bike on.

There are also stunning bridges for cars and trains with bike paths on them, but I won’t be talking about them here because I want to point out to you how in the Netherlands, bicycling is just as important as other modes of transportation and this shows in the comparable quality of their bike infrastructure.

The Nesciobrug (Nescio Bridge) is the longest cycle bridge in the country at 779 meters long and was built in 2006 at a cost of 9.5 million euros. The suspension bridge is located in Amsterdam connecting an island suburb of Ijburg to the mainland of the city. This is a bridge you don’t want to miss if you are in Amsterdam. It’s really long and really high up. 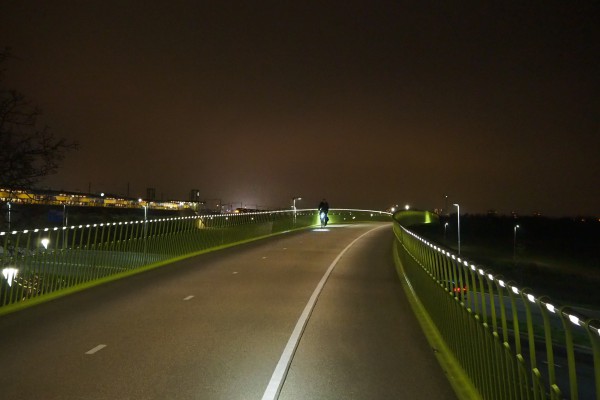 The name of this green bridge located north of Nijmegen is accurately called “The Little Green One” or “Het Groentje” in Dutch. It is elegantly designed with an organic delicate look that to me looks like a part of a plant. It’s 120 meters long at a price tag of 4.8 million euros and was completed in 2013. The bridge helps thousands of cyclists cross a busy highway that runs beneath everyday. What’s cool about biking on this bridge is that there’s an elevated cycle track that sits approximately 4 stories high leading to another bridge that connects to “The Little Green One”. The whole experience of riding the whole thing through is quite exhilarating because you are continuously elevated.

What a marvel! A first of its kind! A floating roundabout that keeps cyclists safe away from high volume traffic. It sits on the outskirts of Eindhoven. It is called Hovenring which priced about 20 million euros and was completed in 2012. It looks like a UFO flying saucer and looks even better at night. You can enter the Hovenring from 4 different directions which is so awesome! The track on it is so wide that it can also be a playground or spot to hang out. 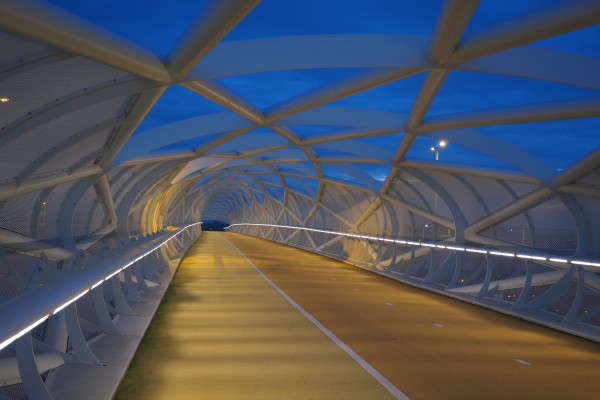 You can find this “Green Connection (De Groene Verbinding)” outside of Rotterdam that connects the city to a nature reserve. As you ride through this 190 meter long bridge (opened this year at a finished cost of 9.2 million euros), the shape of the bridge narrows and then widens. You feel as though you are going through a warped tunnel. Also, the LED lights which are connected to sensors come on as you approach the bridge. Very cool!

The photos here don’t capture the complexity of these structures and the experience of riding through them. Bicycle Dutch has wonderful videos on them. The videos about the bridges are below: