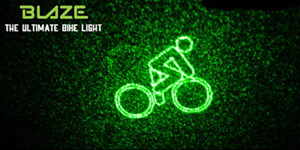 Imagine this: You are happily riding along on your bicycle as you approach an intersection. The traffic light is green so you plan on cruising straight through. There is a silver Honda Civic in the car lane to your left who suddenly wants to make a right turn. The car swiftly merges to the right to execute the turn, and you suddenly find yourself moving fast into an ever shrinking pathway ahead, sandwiched between the car and the sidewalk, with no place to go. Only one of three things can happen:

1. You hit the brakes and/or the driver realizes you’re there and hits their brakes, and you narrowly miss a cosmic collision.

2. Neither of you can stop in time or move out of the way and the next thing you know, you are flying into the side of a metal wall and then laying on the ground dazed, in pain, and hopefully still conscious.

3. You make the split second decision that you’d rather eat concrete than metal, so you kamikaze your bike into the sidewalk and go flying into God knows what.

Unfortunately, we all know too well that this sort of scene plays out every day in the lives of cyclists everywhere. This phenomenon is known as “right hook” and if you’ve never been a victim of it, you know someone who has.

Well, necessity is the mother of invention and seeing that we need a way to announce our presence to oblivious drivers in more ways than just visual, it’s about time that proper bike horns were invented.

So, we’ve rounded up three promising bicycle accessories from Kickstarter, a crowd funding website where inventors can raise funds to develop their products, and have shared what we think about each of them.

The first comes to us by way of our bike-friendly cousin to the north, Portland, Oregon. Orp is a bike horn and light combo that can generate two levels of noise: a polite low level noise and a loud level noise than can reach 96 decibels. They need to raise $90k and with 30 days left to go, they are a little more than 1/3 funded on Kickstarter.

– It has a pleasant sounding lower level noise in addition to the loud one. Sometimes you don’t need to make such a loud racket which can be annoying to people and the lower level noise kind of sounds like a cute little bird chirping.

– It has a bike headlight incorporated so then you can get two birds with one stone.

– It looks easy to affix to your handlebars, seems easy to operate, and easily rechargeable with USB.

– The founder seems to have extensive experience and knows what he is doing.

– You get 5 hours of constant operating time per charge. If you are a daily commuter and/or ride a lot, you may need to charge it quite often.

– Drivers may be confused and even freaked out (that may not be such a bad thing, hee hee) by the unusual sounding noise.

– Field testing needs to be done- sure it can get up to 96 db but is it actually loud enough that drivers can hear it?

Update (2/5/13) – Manufacturer of Linus Bikes are partnering up with Loud Bicycle to develop the bike horn. Yay! I believe this is the reason why the video was taken down.

Honk back at those cars when they honk at you! Loud Bicycle lets you speak the language of the metal death monsters! This is a horn straight out of Boston, Massachusetts that actually sounds like a car horn. They’ve already raised more than $50k on Kickstarter and are now fully funded. Hooray for them!

– Like they said in the video, a driver will understand a car horn sound when they hear it.

– The opportunity to honk back at a driver if they honk at you. This is my favorite aspect.

– Although drivers know the sound of a car horn when they hear it, they will not understand that it is coming from a bike. It’s like seeing a mouse running around and hearing the sound of a lion roar, but no lion. Confusion may still result. (On a side note, did you hear about that dog that looks like a lion?)

– A bit bulky and unattractive. It would be better if there was a bike light incorporated.

– We don’t like the name “Loud Bicycle” that much because it doesn’t sound like the name of a bike horn or even a bike accessory. But I guess a rose by any other name would smell just as sweet?

This one is not actually a bike horn, but we thought it was worthy of a mention. BLAZE is a bike light from London, UK that creates visibility for cyclists by projecting a laser bike image on the road a few feet ahead so that drivers will see it and know there is a bike nearby. It helps a lot with staying visible, even in a car’s blind spot. They were fully funded on Kickstarter when funding closed on December 23rd of last year. They raised 55k in sterlings. Hope we will see these in stores in The States as well as the UK.

– The concept is really cool and original.

– The light projected will definitely increase visibility and looks attractive too.

– “Built in the UK and assembled by hand” and looks high quality.

– Has a safety feature built in to prevent the damaging of people’s retinas with the laser- the laser symbol will not work unless it is mounted on a bike, but the LED light will still work.

– Their Kickstarter video is relaxing.

– Laser projection is not as visible in day light.

– Battery on full charge lasts up to 6 hours in constant on mode. According to them, a commuter cyclist would only need to charge it once a week. That is still too frequent for us.